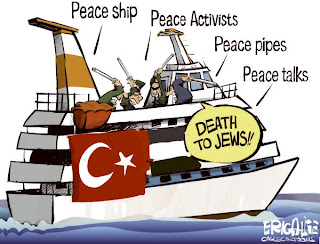 Not a while ago, I read this report by this professor regarding how Turkey does not need Israel. The professor even went further to claim that Turkey does not need the West either. He even claimed that it is the West who needs Turkey because Turkey is the bridge between the West and the Muslim Middle East. The professor argued his case through cultural and economic stand point, none of which in my opinion has any basis. It was a simple wishful Anti-Israel thinking to justify an Islamic takeover of Turkey.
Oh well, as time went on, it was proven to be false. For those who are not my friends on Facebook, I did not write anything about it on my blog. However, I argued on my Facebook that Turkey will have to backtrack no matter what the results is or how the world reacts to Flotilla incident. I predicted that the world and especially Europe are taking notes about Turkey’s involvement. I must confess that I did not expect how soon that prediction would come true.
Here is the News Article. As it is shown, Turkey has to shift its policy. Turkey had no other choice but to be friends with Israel. As much as Erdogan would love to destroy that alliance, Turkey’s role as a key figure in the Middle East is directly tied with its alliance with Israel. Even at this point that Turkey is trying to make friendly gestures toward Israel, members of Congress and Jewish leaders do not trust Erdogan and the reason for it is very clear. Erdogan comes from a party with Islamic background and tenancies. Erdogan was also suspected of being an Islamist before he was even elected. His harsh criticism of Israel resembles rhetoric from Iran and other terrorist harboring nations who use Islam as a tool for legitimacy. At the same time, Erdogan had the audacity and of course out of pure stupidity to claim that Israel’s policy toward Palestinians is worst than what is going on in Darfur where more than 100,000 people have been brutally murdered by Arab/Muslim militias. Of course, the only reason he is not condemning the crimes in Darfur just like other Leftists’ or Arab leaders is due to the fact that the group who is committing all the crime happens to be Muslims. Erdogan claims that his support for Palestinian is notioned in his thirst for humanity and human rights. However, it does not take an idiot to see that Erdogan is a closet Islamist and his biased views toward Israel is rooted in his religious beliefs that Israel does not have the right to exist in what he claims to be a Muslim land.
Of course, this view is shared with a lot of pro-Palestinian Muslim supporters who simply do not care for the living condition of Palestinians. Perfect example of this is some Iranian students in Diaspora who are die hard Pro-Palestinian fans. When you ask them, what Arabs have done for you that you support their terrorist and fraudulent cause like that; their only response is because “I support Human Rights for all people.” However, in their blogs or publications, you do not see a word condemning what is happening in Darfur. When you call them out as to why have you dedicated most of your blogs to condemn Israel and not a word about what is going on in Darfur, they simply respond, “I don’t have time to condemn every Human Right violation in the world.”
As it is shown, people like Erdogan and those bloggers are fueled not by love for Human Rights, rather than it is hatred. It is the hatred of Jews and the Jewish State that motivates these people to act the way they do, to say things that they say, and believe what they believe. I remember, after Flotilla incident, CNN was interviewing this Persian girl who was on Flotilla about what took place. The girl started just pure Anti-Israel rants and lies about what had taken place. Of course, this was right before Israel releases the footages from what had happened. She said lie after lie about how Israel entered the ship opening fire indiscriminately, without any warning, and how ruthless the soldiers were after boarding the ship. Later it was shown that it was the terrorist passenger of the love boat who attacked and attempted to lynch the commandos that boarded the ship with paint-guns. As it is obvious, the hatred of Jews and Israel motivates a person to go on national T.V and lie like that to justify a cause. People like Erdogan are not motivated by love for Human Rights. They are motivated by hatred.
This hatred is the reason why U.S. Congress and American Jews do not trust Erdogan and people like him. At the end, it will take a lot more for Turkey to restore its reputation in the world stage as a serious key figure. It is irrelevant how economically powerful they are in the region, if they choose to behave like Iran and other terrorist nations, they will simply lose their status. That also goes against what Atta Turk had wished for Turkey. What Erdogan did toward Israel was incredibly stupid and of course it was financed by Iran. A lot of people suspect that Erdogan and Turkey will pay a heavy price for it. Erdogan is incredibly popular in Turkey and of course that is thanks to hatred of Jews and Israel in Turkey. However, Europe and the U.S will not trust Turkey for a long time as an ally. So the last question is, was it really worth for Erdogan to defame Israel (make no mistake, what he did to defame Israel was brilliant-no body caused Israel that much damage like what Erdogan did) given the current results for Turkey? If you ask me, he will certainly do it again.
Posted by Ben Kahen, ESQ. at 10:05 AM

Unbelievable Story of a Mother who Lost a Son in Gaza 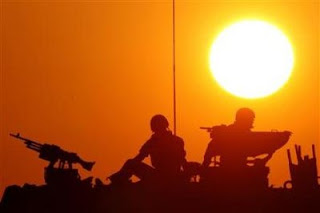 This is a true story that is going around in Israel. It blew my mind. So I am going to use such an inspiring story to make my come back to the blog world.

Dvir Aminolav was the first Israeli soldier killed in the 2008 Gaza War. His mother Dalya missed Dvir, terribly. One night before she went to bed, she said in a loud voice: "G-d, give me a sign, give me a hug from Dvir so that I will know that his death had some meaning."

That week her daughter asked her to accompany her to a musical performance at The International Crafts Festival in Jerusalem. Dalya, feeling quite depressed, did not want to go to the concert, but she didn't want to disappoint her daughter either, and agreed to go halfheartedly. The concert was a bit delayed. A two-year-old boy began wandering through the stands. He walked up to Dalya's seat and touched her on the shoulder. A preschool teacher, Dalya turned around, saw the boy and smiled warmly.

"That's a nice name. Do you want to be my friend, Eshel?" The boy nodded in reply and sat down next to Dalya.

Eshel's parents were sitting two rows above. Concerned their little boy was bothering Dalya, they asked him to come back up. But Dalya insisted that everything was fine.

"I have a brother named Dvir," two-year-old Eshel chimed in, as only little children can. Dalya was shocked to hear the unusual name of her beloved son, and walked up the two rows to where Eshel's parents were sitting. She saw a baby in his carriage, and apologizing, she asked, "If you don't mind me asking, how old is your baby and when was he born?"

The baby's mother replied, "He was born right after the war in Gaza."

Dalya swallowed hard. "Please tell me, why did you choose to name him Dvir?"

Baby Dvir's mother began to explain. "When I was at the end of my pregnancy, the doctors suspected the fetus may have a very serious birth defect. Since it was the end of the pregnancy, there was little the doctors could do and I just had to wait and see how things would turn out.

When I went home that night, the news reported that the first casualty in the war was a soldier named Dvir. I was so saddened by this news that I decided to make a deal with G-d. 'If you give me a healthy son,' I said in my prayer, 'I promise to name him Dvir, in memory of the soldier that was killed.'"

Dalya, the mother of Dvir, stood with her mouth open. She tried to speak but she couldn't. After a long silence, she said quietly, "I am Dvir's mother."

The young parents didn't believe her. She repeated, "Yes, it's true. I am Dvir's mother. My name is Dalya Aminalov, from Pisgat Zeev."

With a sudden inspiration, Baby Dvir's mother handed Dalya the baby and said, "Dvir wants to give you a hug."

Dalya held the little baby boy in her arms and looked into his angelic face. The emotion she felt at that moment was overwhelming. She had asked for a hug from Dvir - and she could truly feel his warm and loving embrace from the World of Truth.